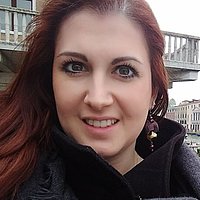 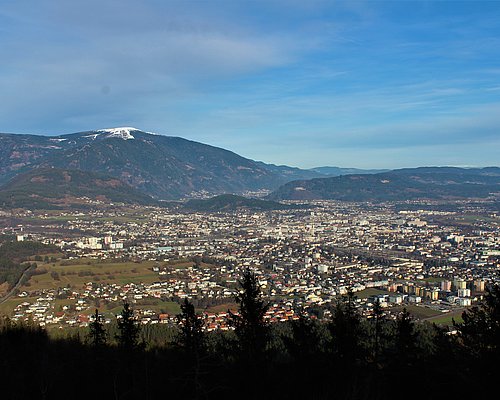 Just like in many cities around the world, the city of Villach is made up of many different neighborhoods and small villages, each with its own characteristics. But when you’re new to a place, or considering moving there, it’s often very difficult to decide where to live - you don’t know if any areas are nicer than others, what the more family-friendly neighborhoods are, or where certain services can be found. That’s why we at Welcome2Villach have decided to do a short series of blogposts that will give you a detailed overview of the different areas of Villach, in order to help you learn where you might choose to live as a family, as a couple, or as you get older. We’ll start by sharing important information about the historic city centre in this first blogpost, and expand outwards from there in the following two posts.

The Innere Stadt, or city centre, is located right in the middle of downtown Villach, between the main train station to the north and the Kilzer Bridge to the south. The Ossiacher Zeile road borders the city centre to the east, and the railway line to Italy and Slovenia is on the western side. The Drau River flows through this neighborhood dividing the city centre into two parts, one north and one south of the river. 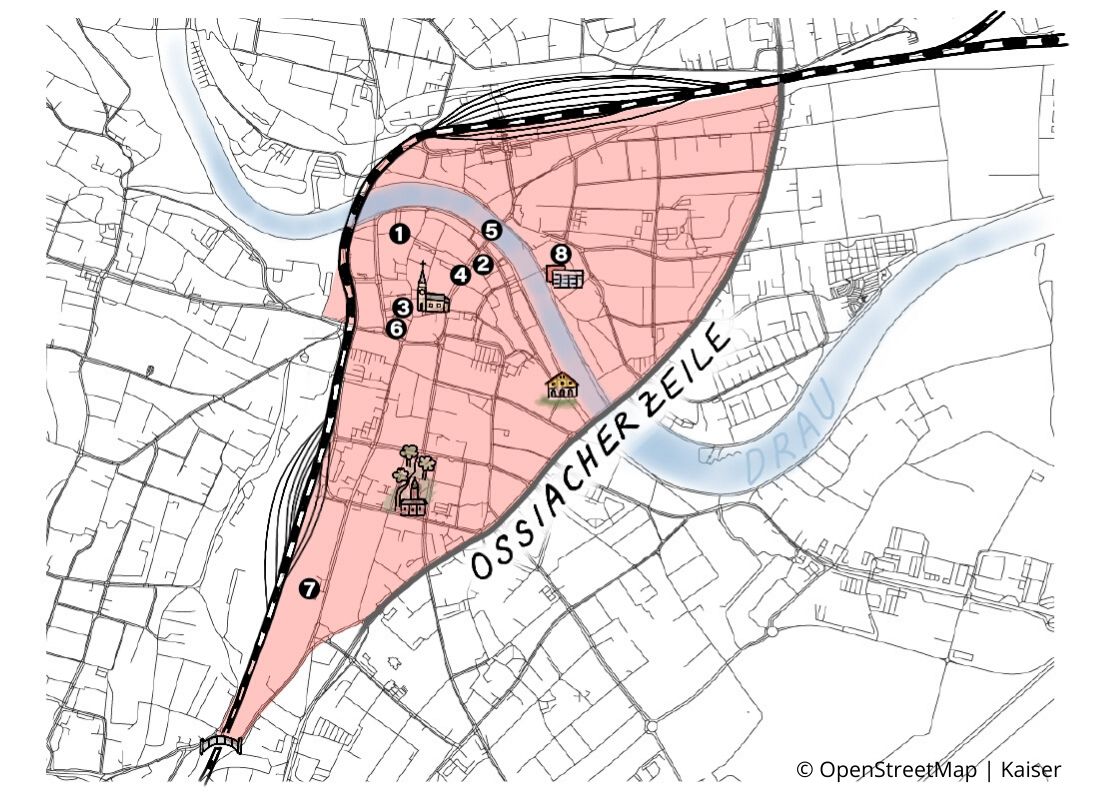 Villach’s city centre is an ideal place to live and work thanks to the various shopping opportunities, great educational and work offerings, public transportation, and a diverse range of recreational areas and parks close to the Drauradweg bike path. It is also one of the most popular neighborhoods for expats in Villach! Among the many opportunities in the city center, you can: learn to play an instrument in the Musikschule (see #1 in map); borrow books or other media from the public library; use the services in the city hall and the Congress Center; see original language movies at Stadtkino; join the Turnverein or the Carinthian International Center (#2); travel from two different train stations; visit the temporary exhibitions in the city Museum (#3); attend a course at BFI or the Volkshochschule; and send mail from either of two post offices. There’s lots to do in the city centre! 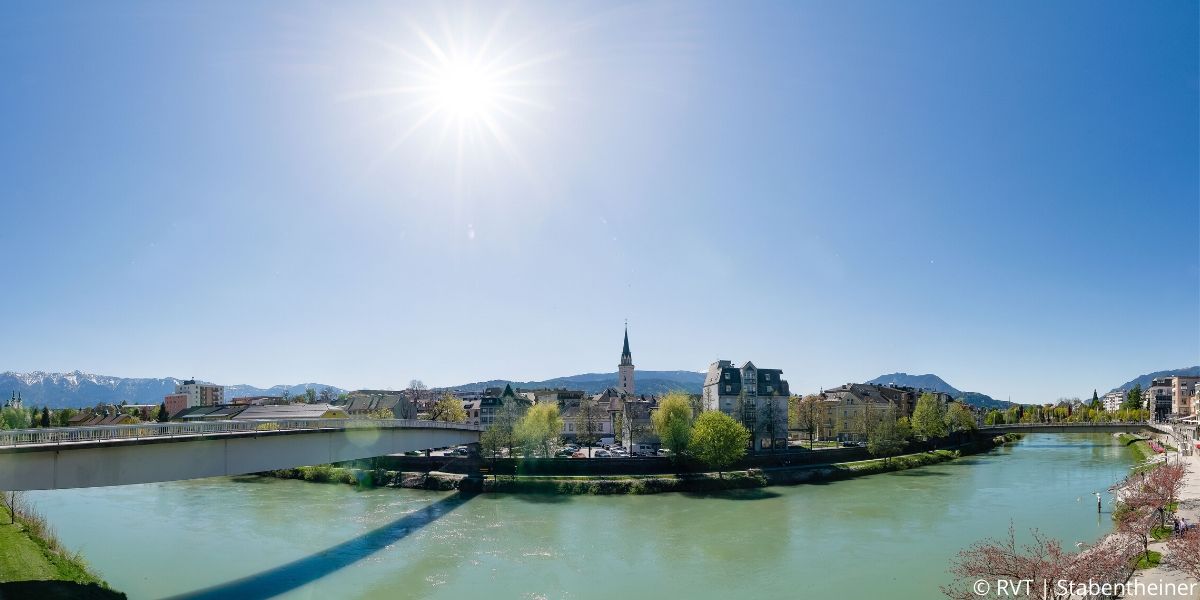 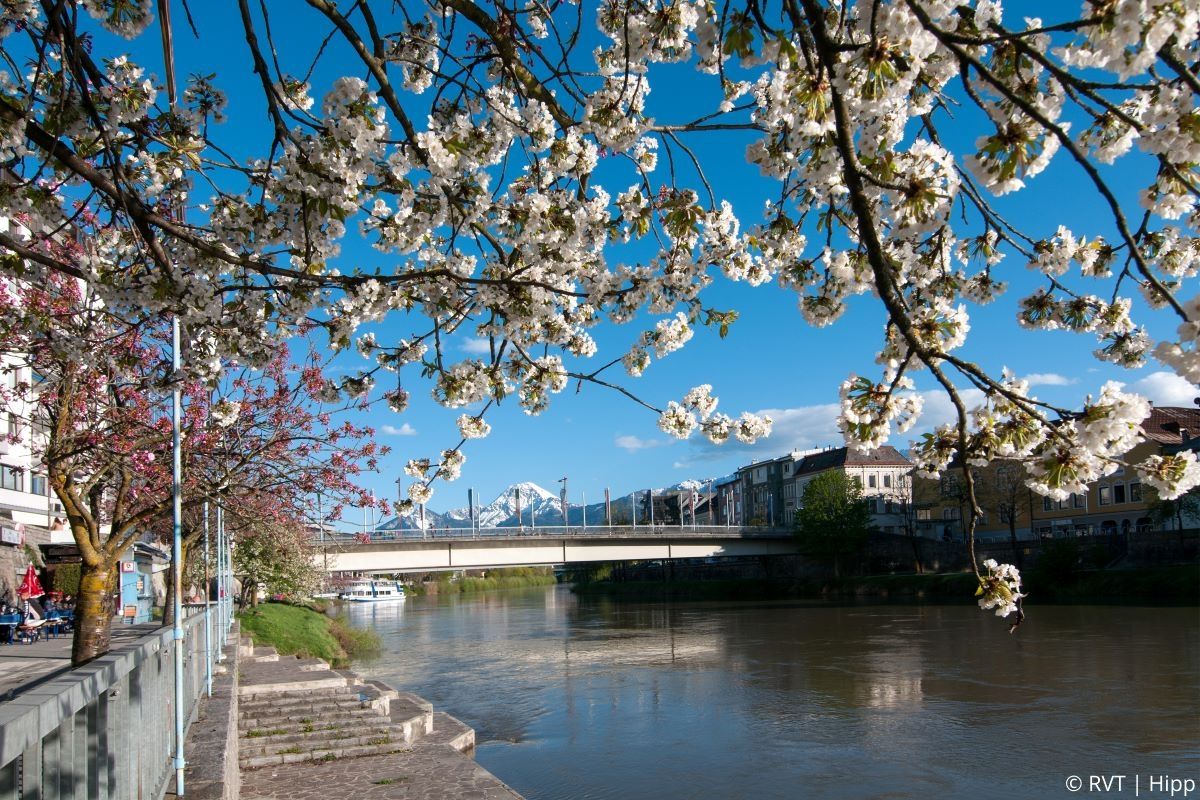 If you’re looking for housing, it’s important to know that in the city centre there are vastly more apartments than single-family houses, and as a historic center, buildings are mostly older than in the rest of the city. In terms of educational opportunities, in this area of Villach there are several different types and levels of schools offered for children. There are several pre-schools, including Kindergarten Pestalozzi and Kindergruppe Sonnenstrahl, primary schools include the Khevenhüllerschule, and among the secondary schools are CHS Villach, Polytechnische Schule Villach, and Peraugymnasium. Regarding transportation, the city centre is very well connected through its extensive bus network, not to mention the two train stations. If you live in the city centre and own a car, please note that you will need a private garage or will have to register with the city for permission to drive and park on the streets that are restricted to residents only.

In the city centre there is unique architecture with distinctive charm and a mix of various styles, and tourists and residents alike can admire the beautiful buildings while walking through the large pedestrian zone. Everything in the city centre is easily accessible to those on foot, and throughout the year the city centre of Villach attracts countless visitors and tourists who enjoy shopping and strolling on her streets.

Most of the major events that give Villach a Mediterranean flair are located here, such as Austria’s biggest traditional festival known as the Villacher Kirchtag, the carnival celebrations of Villacher Fasching, and the Street Art Festival, which are all centered around the Hauptplatz (#4). The Draubrücke (#5), or Drau Bridge, is another key location in many of the events mentioned above, and is also a great place to look out over downtown Villach. 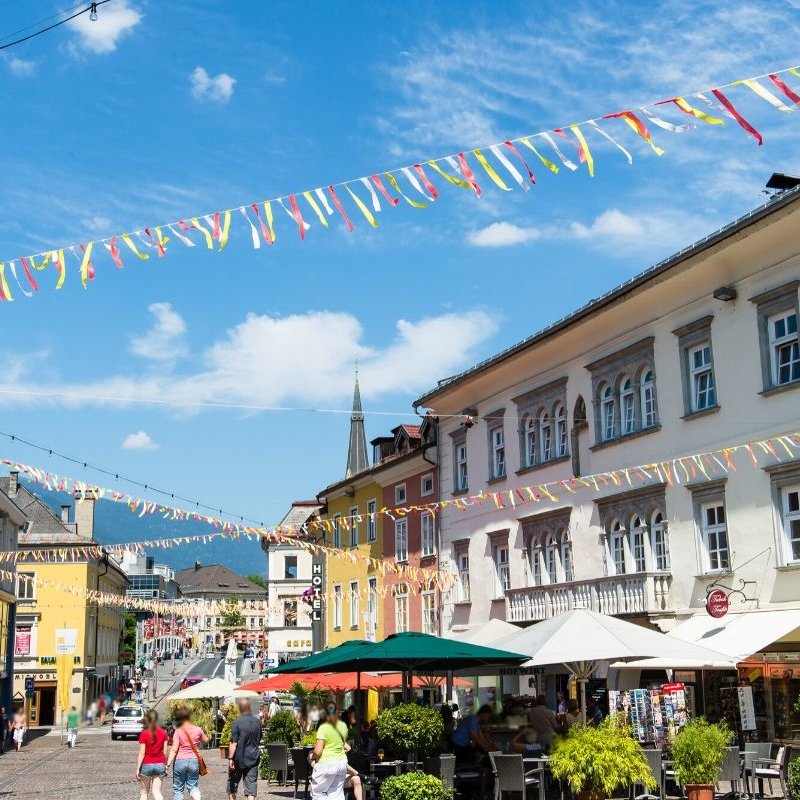 Hans-Gasser-Platz (#6) is another nice place in the city centre, named after the famous painter and sculptor. Covering 2200 m², the square was completely renovated in 2017 and is now a modern and smart hub with shops, cafés, office space, and apartments. The square is great in terms of accessibility - the bus stop at Hans Gasser Platz is one of the two main bus hubs for local public transportation in Villach (the second one is located at the main train station), and besides plenty of space to park your bike and charging stations for e-bikes (check out our post about eco-friendly mobility in Villach), there is also a new built-in guidance system for visually-impaired people. 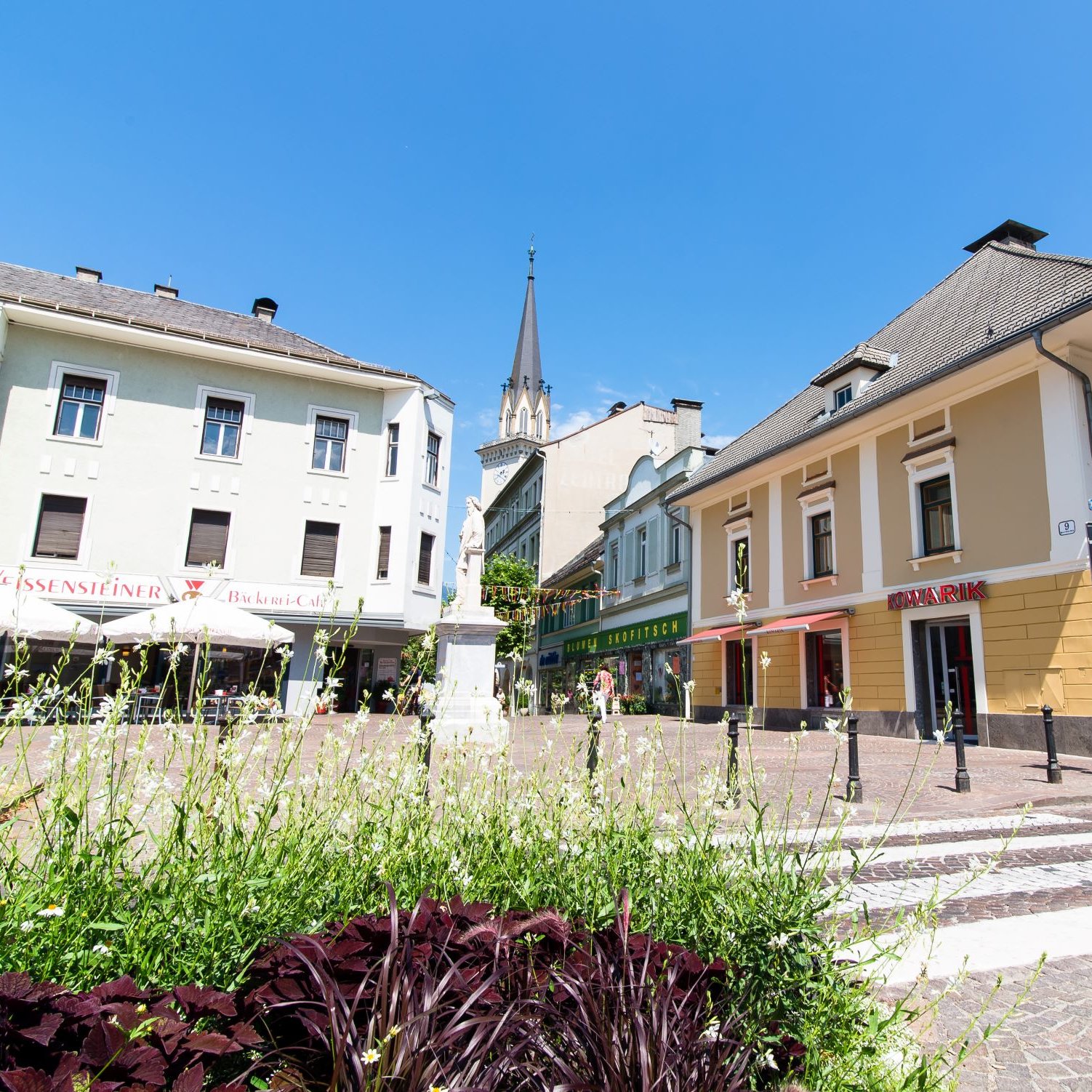 Additionally, every Friday from 9 a.m. - 3 p.m. the Hans Gasser Platz hosts Villach’s organic farmers market, where you can find fresh and mostly local food of all kinds. And this is also a site where tons of fun happens during the Villacher Kirchtag, the place where you will find the Ferris wheel and funfair rides for kids during this city-wide traditional festival. 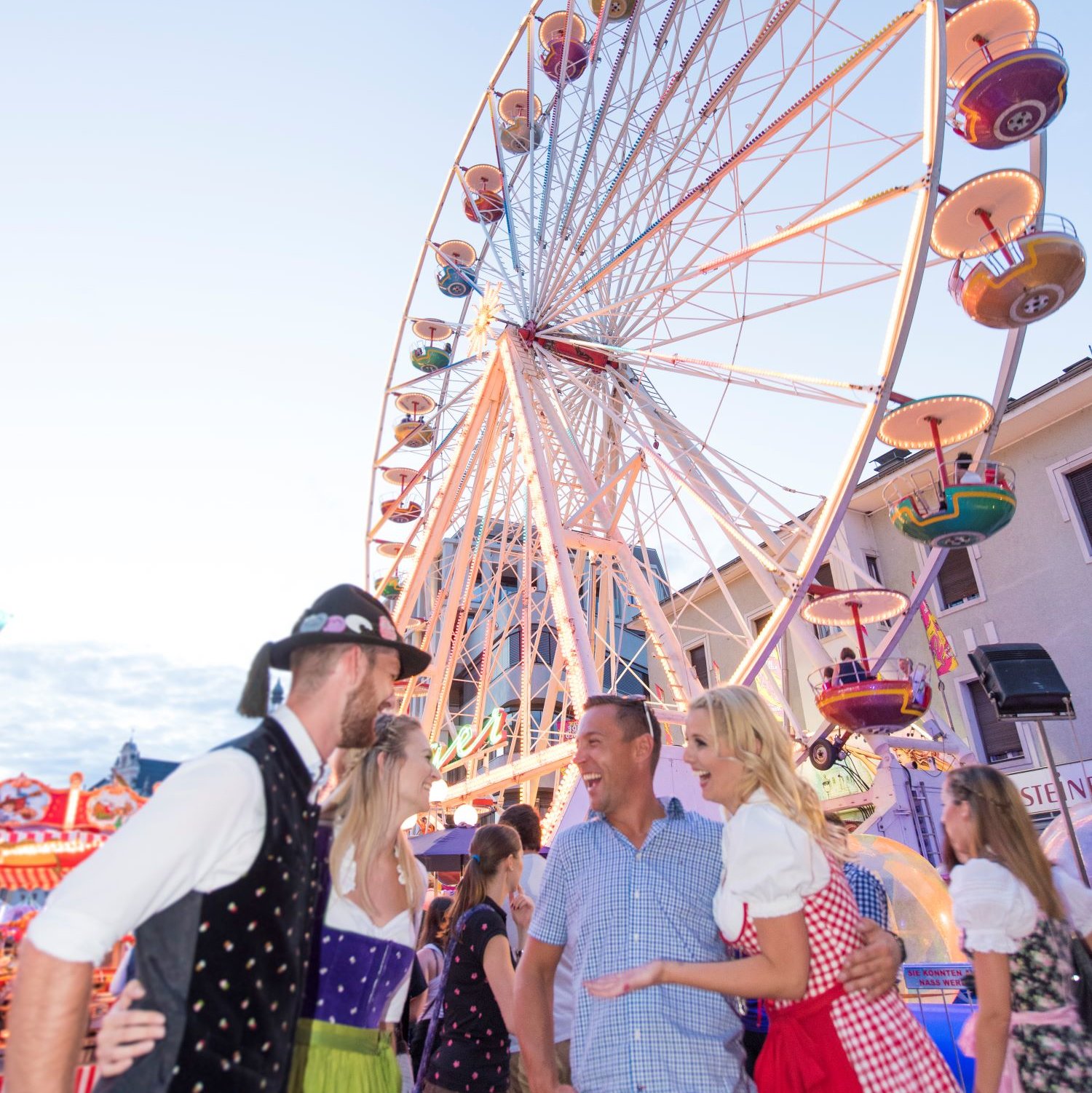 Other hot spots in the city center are the Burgplatz and Lederergasse. Every Wednesday and Saturday from 7 a.m. - 12 p.m. at the Burgplatz you will find the Villacher Wochenmarkt, a large farmers market with regional products and freshly prepared meals. The Lederergasse, on the other hand, is known for its bars and restaurants, and could be considered the center of nightlife in the city. 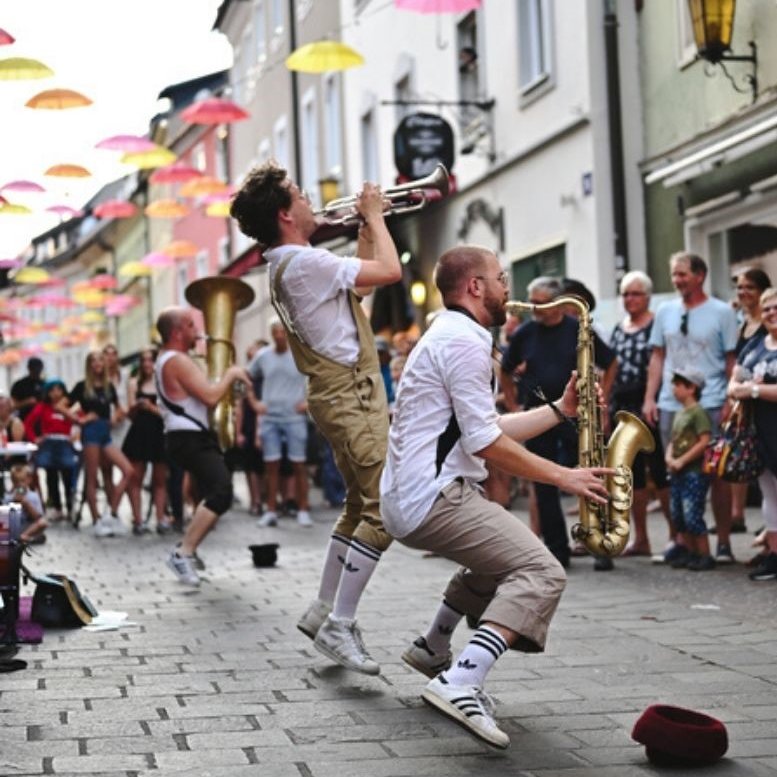 If you’re looking for somewhere to have fun or relax, there are several great options in the city centre. If your kids want to run around or you want to enjoy nature, check out the Stadtpark, which is a great place to play or unwind. This city park is located right next to the Protestant Church and is a large park with lots of seating, a fantastic playground for children, and a beautiful fountain. 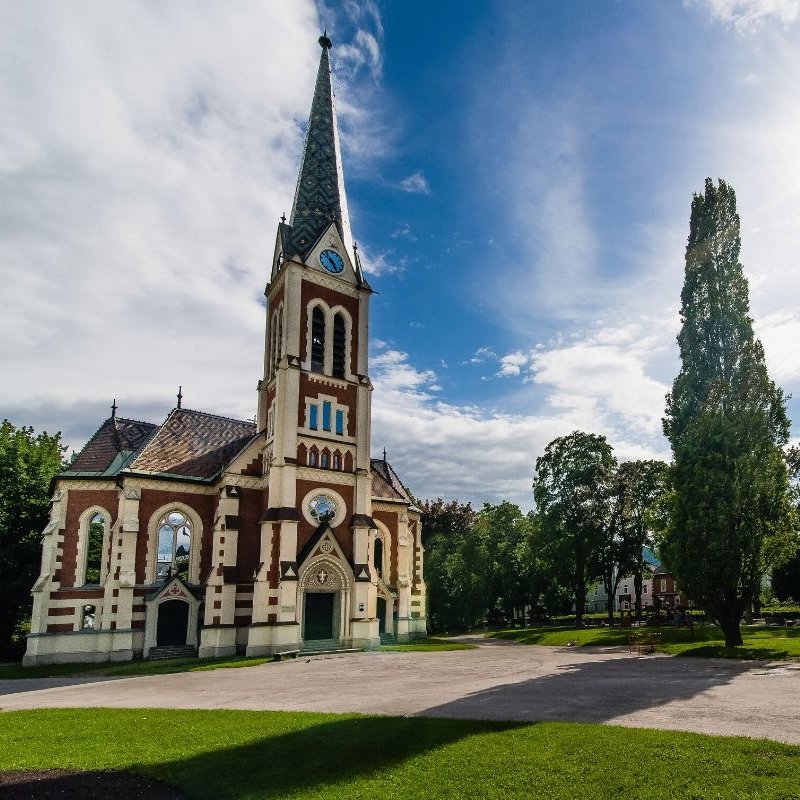 Just down the street from the city park is Villach’s indoor climbing hall, the Kletterhalle Villach (#7), where beginners and experienced climbers can enjoy 2000 m² of climbing terrain, more than 200 routes, and bouldering areas. And if you’re looking for a fun place to slake your thirst or grab a bite to eat, check out the Villacher Bier brewery (#8)! 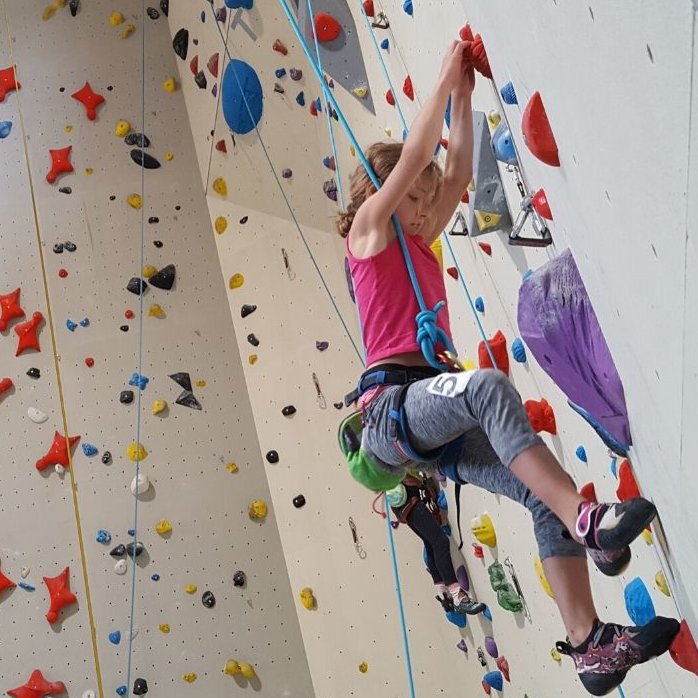 Overall, the city centre of Villach has a lot to offer families, young people, and senior citizens. And to find out about the rest of this beautiful city, stay tuned for our next blog posts!